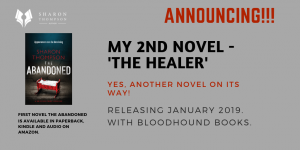 Irish writer Sharon Thompson’s debut novel ‘The Abandoned’ launched on Thurs 25th Jan 2018 at #1 on Amazon and now she will have her second novel ‘The Healer’ published a year later, in January 2019.

On pre-order kindle sales, ‘The Abandoned’ dominated the Irish crime category and was a number one best-seller. Available in paperback and kindle on Amazon, this gritty crime novel, was also made into an audio book. Bookshops, Liber in Sligo, Supervalu in Carndonagh and Farrens Moville, stock signed copies.

‘The Healer’ takes one of the characters from ‘The Abandoned’ called Molly McCarthy and tells her story. Molly is a child in 1940s Ireland with the ability to see her guardian angels, and has gifts as a healer. However, she has learning difficulties and is feared as a ‘half-wit’ by her family and Sligo community.

Conflict and abuse follow Molly. Her mother, Nancy, resents her gifts and also the stigma of having an unusual child. Molly’s father Michael, and his brother Vincent, sexually abuse Molly. She finds it difficult to express herself, but she does have silent insights into the world around her.

Following Molly’s life, The Healer explores one little girl’s journey through the darkness around her. Will she listen to her guardian angels? Can she heal herself and find a safe home? Will she find love and survive a world of crime, immigration and violence? Will The Healer ever be healed?

Linda Green book blogger adds, “From the talented writer of The Abandoned, comes the harrowing tale of a woman who will not be kept down no matter what. The Healer will haunt your dreams, make you uncomfortable, and have you fighting alongside Molly for the life that she truly deserves. A truly powerful story in every sense of the word by a writer that knows how to make a reader feel every emotion on the page.”

Thompson tells us, ‘I am delighted to be working again with the great Bloodhound Books. The support of my local papers, bookshops and communities has been amazing. I’d like to thank everyone who buys my book and huge gratitude to all those who gave my debut such positive reviews. Readers who liked The Abandoned should relate well to The Healer, as the books are connected but can stand alone too.’

Bloodhound Books UK founder and director, Betsy Reavley says, ‘We are delighted to announce that readers can look forward to this thriller from number 1 best-selling author Sharon Thompson. The Abandoned was released in January of this year to widespread critical acclaim and significant commercial success. We are thrilled that The Healer will launch in Jan 2019.’

The Abandoned is available to purchase online on Amazon in paperback and kindle. Signed copies are sold locally.